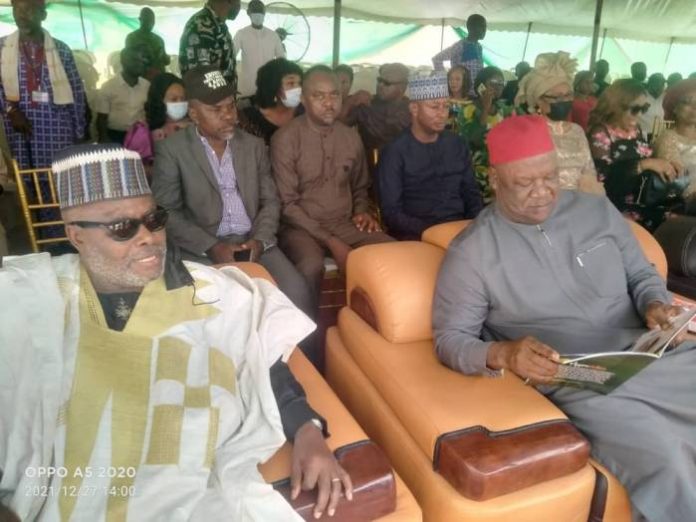 As the 2023 presidential aspiration of Senator Anyim Pius Anyim continues to generate nationwide support, former president of the Senate, Chief Adolphus Wabara, and some political leaders in the South-East, have expressed their unflinching support for Anyim.

The leaders are of the view that the Nigeria’s former number three citizen, Anyim Pius Anyim, is most suitable for the nation’s top job in terms of leadership experience, national stature, nationwide acceptability, age, maturity, comportment and capacity to manage the country and her economy.

Speaking on Monday, December 27, 2021, at a grand reception and conferment of Chieftaincy title of “Maduforo Nde Ngwa” on the Senate Minority Leader, Senator Enyinnaya Abaribe, by the traditional council of Ngwa zone, in Abia state, Senator Wabara called on the Nigerian electorate, particularly the people of the South East zone, to rally round Senator Pius Anyim in his quest to clinch the ticket of his party at the primary and ultimately contest and win the presidency of Nigeria.

Wabara said Senator Anyim has distinguished himself in his previous civil service career and political positions as the President of the Senate and as the Secretary to the Government of the Federation (SGF) and therefore will be a fit and proper person to pilot the affairs of Nigeria at this crucial moment of our country’s life.

Sen. Wabara added that Senator Anyim is a dependable leader and a team player whose commitment to the unity of the country, rule of law and national equity is renown. He stated that those who have worked closely with Senator Anyim could easily attest to his ever pan-Nigerian disposition and his uncommon courage in the pursuit of true democracy, good governance and commitment to the greatness of Nigeria.

Other leaders of the South East zone and eminent political leaders outside Igboland who were invited guests to the occasion and who spoke at the event, unanimously endorsed Senator Anyim as the gold hope for Nigeria in 2023.

However, Anyim’s chief host who was being honoured by his Ngwa people, Senator Abaribe, said it was gratifying that Senator Anyim has declared his interest for the presidency when it appeared no one was stepping out for a challenge. Abaribe urged Nigerians and leaders from all the geo-political zones in the country to invest their trust and support for Senator Anyim.

In his speech at the occasion, Senator Anyim, commended Senator Abaribe for his illustrious service to his people which necessitated the chieftaincy title of “Maduforo Nde Ngwa” by the traditional council in his zone.

He stated that what is needed in the country today are leaders that will work for the interest of the people and inspire great hope; leaders who will understand the needs of the people and empathise with them in their problems by finding a lasting mitigation to those challenges.