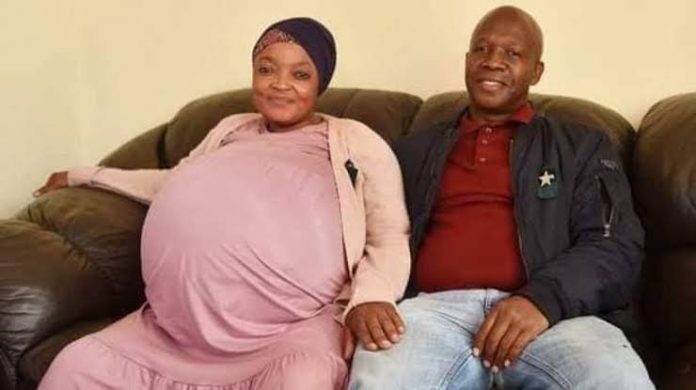 A woman, whose husband is unemployed, has reportedly given birth to 10 babies in Pretoria, South Africa.

Before setting the new record, Gosiame Thamara Sithole, the woman, who is from Tembisa Township in Ekurhuleni of the Gauteng province of South Africa, had been delivered of a set of twins, who are now six years old.

Her husband Teboho Tsotetsi has been reported as saying that she was delivered of seven boys and three girls through Caesarean section 29 weeks into her pregnancy.

“It’s seven boys and three girls. She was seven months and seven days pregnant. I am happy. I am emotional. I can’t talk much. Let’s talk again in the morning please,” The Pretoria News quoted him to have said.

Sithole’s husband said they were astonished by decuplets after scans only showed eight in the womb.

One South African official confirmed the births to the BBC, however another said they were yet to see the babies.

BBC quoted a family member, who did not want to be identified, as saying that Ms Sithole had had 10 babies – five via natural birth and 5 via caesarean section.

iol.co.za, a South African website, quoted Sithole as saying that two of the babies could not be detected initially because they were inside the wrong tube.

In an interview during the latter part of her pregnancy, she reportedly said the pregnancy period was tough.

“I am shocked by my pregnancy. It was tough at the beginning. I was sick. It was hard for me. It’s still tough but I am used to it now. I don’t feel the pain anymore, but it’s still a bit tough. I just pray for God to help me deliver all my children in a healthy condition, and for me and my children to come out alive. I would be pleased about it.

“How would they fit in the womb? Would they survive? What if they came out conjoined at the head, in the stomachs or hands? Like, what would happen? I asked myself all these questions until the doctor assured me that my womb was starting to expand inside. God made a miracle and my children stayed in the womb without any complications,” Sithole had said.

Her unemployed husband has decided to do away with fear and embrace the children.

A woman who had eight babies in the US in 2009 currently holds the Guinness World Record for the most children delivered at a single birth to survive.

Last month, 25-year-old Halima Cissé from Mali gave birth to nine babies, who are reportedly doing well at a clinic in Morocco.

Multiple births involving more than three babies are rare and often the result of fertility treatments – but in this case the couple say they conceived naturally.