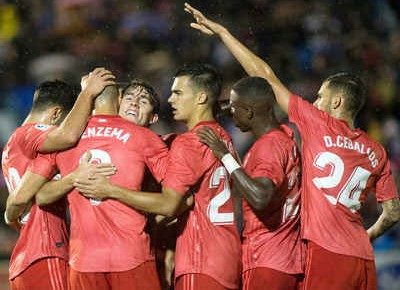 Santiago Solari got off to the perfect start as Real Madrid’s interim coach when his side thrashed Melilla 4-0 in the Copa del Rey on Wednesday.

Title-holders FC Barcelona scraped a 1-0 win at third-tier Cultural Leonesa thanks to Clement Lenglet’s late header, while Girona earned a 2-2 draw at Alaves.

Getafe won 2-1 at Cordoba and Valladolid earned a 2-1 away win over Mallorca in other round of 32 first-leg clashes.

In Real Madrid’s first match since Julen Lopetegui was sacked after a dire run capped by a 5-1 loss to FC Barcelona on Sunday, Solari’s side flexed their muscles against Melilla.

Solari saved the likes of Gareth Bale, Luka Modric and Toni Kroos the trip to the north coast of Africa and the Spanish enclave of Melilla.

But he did start with Captain Sergio Ramos and French striker Karim Benzema against the third division minnows.

Benzema, who has struggled for form this season, broke the deadlock from close range after being teed up by Alvaro Odriozola, with Vinicius Junior setting up Marco Asensio for the second.

Brazilian striker Vinicius, largely ignored by Lopetegui, struck the crossbar in search of the third, which was eventually bundled in by Odriozola, another player who struggled to get minutes under Lopetegui.

Substitute Cristo Gonzalez added a fourth in stoppage time to give Solari a convincing debut win for his side who are ninth in La Liga.

“The team played with smiles on their faces, they were keen and committed. The final score is a result of that,” Solari told reporters.

“It wasn’t easy, but we worked hard and played with those characteristics. The pitch was heavy and they pressed very high.

“We have to be happy. The players are committed to the shirt and to the fans who are with them. I’m now a part of this group.”

Record 30-times Cup winners FC Barcelona were on the back foot against Cultural Leonesa, with goalkeeper Jasper Cillessen making some smart saves to keep Ernesto Valverde’s heavily-rotated side level.

Lenglet headed Ousmane Dembele’s free kick home at the near post in stoppage time to earn the Catalans a narrow advantage heading into the second leg, with matches taking place between Dec. 4 and Dec. 6.