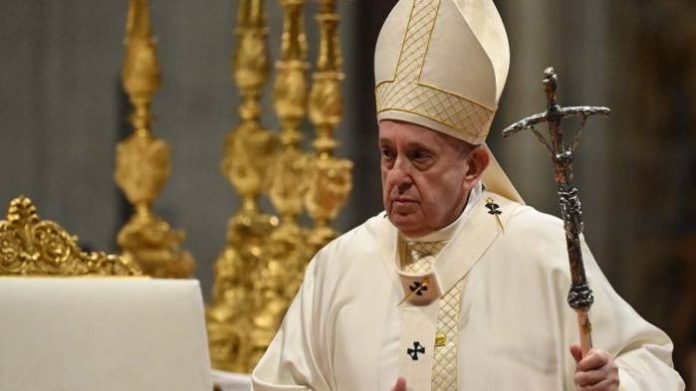 Pope Francis Sunday voiced his “sadness” and “shame” over the fate of 130 migrants who went missing after their boat capsized in the Mediterranean.European humanitarian group SOS Mediterranee said Thursday that ten bodies were spotted near a capsized rubber boat off the coast of Libya, which had around 130 people aboard.

“I confess to you that I am very saddened by the tragedy which once again occurred in recent days in the Mediterranean,” he told the faithful gathered in Saint Peter’s Square.

“Brothers and sisters, let us all ask ourselves about this umpteenth tragedy. It is a moment of shame.”

“One hundred and thirty migrants died at sea, these are people, these are human lives who for two whole days have implored in vain for help, aid which did not arrive,” the pontiff said.

“Let us pray for these brothers and sisters and for so many others who continue to die on these dramatic journeys.

“Let us also pray for those who can help but prefer to look in the other direction.”

NGOs accuse EU countries of not only failing to help migrants in danger in the Mediterranean but of hindering rescue efforts.

Over 450 migrants have perished in the Mediterranean so far this year, according to the International Organization for Migration, most attempting to reach Europe from Tunisia or Libya.