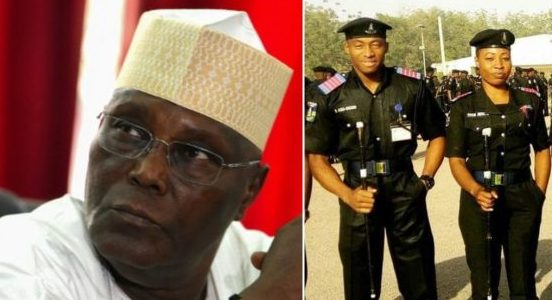 Zamfara State Police Command has debunked claims by counsel to the Peoples Democratic Party, PDP, presidential candidate, Atiku Abubakar that their witnesses were attacked on their way to the Presidential Election Tribunal on Friday.

Atiku’s lawyers, Dr. Livy Uzoukwu had told the tribunal that the witnesses were attacked while travelling to Abuja to testify in the ongoing petition against the emergence of President Muhammadu Buhari as the winner of the 2019 Presidential election.
The PDP and its Presidential candidate claiming that they won the election.

The Police described the claim as “misleading and a calculated attempt” to undermine the efforts of the state to fight insecurity.

In a statement by SP Muhammad Shehu, the Zamfara Police command insisted that no such incident took place in the state on Friday.

“It is pertinent to categorically state that as far as the crime statistics of Zamfara state is concerned, there was no attack by bandits either on villages or on any person or group of persons traveling on any highway in the state.

“Since the inception of the ongoing peace and dialogue initiative in the state, attacks, kidnapping and other heinous crime in the state have been reduced drastically, a situation that has restored peace and stability in the state, Shehu said.

He said the police had made unprecedented achievements through the rescue of over 100 persons kidnapped and held in captivity for months through the initiatives of
Commissioner of Police Usman Nagogo.

“Therefore, the command wishes to refute the entire story as misleading and a calculated attempt to undermine the current effort of both the state government and the police to bring a lasting peace for social and economic development in the state,” the statement added.