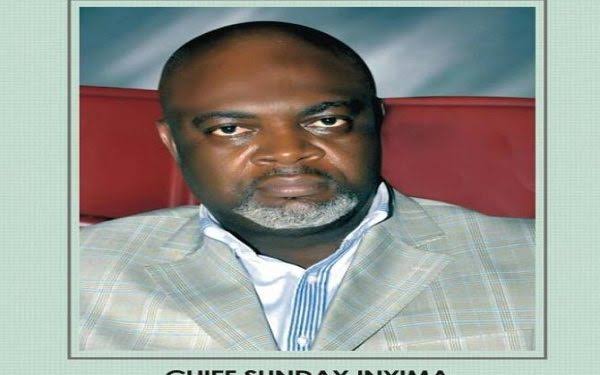 Chief Sunday Inyima, the Ebonyi Commissioner for Water Resources, has debunked insinuations of his resignation from Gov. David Umahi’s cabinet, saying that he cannot resign on facebook.

The News Agency of Nigeria (NAN) recalls that the social media, especially facebook was recently awash with reports of Inyima’s resignation occasioned by Umahi’s defection from the PDP to the APC.

Inyima, a former Chairman of Ohaukwu LGA of Ebonyi and popularly known as ‘Agbalagba’ in the political circles, made the declaration on Saturday while addressing newsmen.

“I cannot recollect collecting my appointment letter from facebook or the radio station where I purportedly announced my resignation.

“I instead collected my appointment letter from the governor through the Secretary to the State Government (SSG) and will follow such channel if I intend to resign.”

The former commissioner for lands and housing said that he did not attend the last state Executive Council meeting because he was attending a World Bank regional water conference in Enugu.

“My absence possibly fueled speculations of my resignation but the trip to Enugu for the conference was approved by the governor.

“It is unfortunate that our people engage in gossip and back-biting and this was engineered by a particular political office holder from the area.

“The fake news of my resignation, however, showed me that I am still relevant and important and I am gratified over it,” he said.

He declared his support for the governor’s defection to the APC, noting that it signified a new dawn for the state.

“It is time to connect Ebonyi and the South East zone to the national ‘grid’ and make it available where things are shared to other states and zones.

“We are now operating on an electric high tension and Ebonyi and the South East zone are qualified to produce the president of the country,” he said.