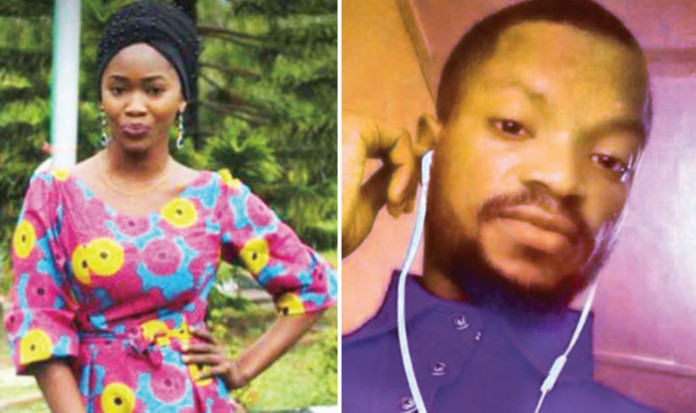 Saidu-Shakiru Adeyemi, the boyfriend of Miss Khadijat Oluboyo, the slain daughter of Lasisi Oluboyo, former deputy governor of Ondo State, has denied involvement in her death.

Oluboyo, the 25 year-old final year student of Adekunle Ajasin University, Akungba Akoko, was on Sunday found dead at the home of her boyfriend in Akure.

Adeyemi denied involvement in Oluboyo’s death when he faced journalists at the headquarters of the Ondo State Police Command on Wednesday in Akure.

According to him, it was the slain girl that brought two boys into his room, who eventually killed her.

Adeyemi explained that he had dated Oluboyo for four years before they parted ways in 2015, and that they only reconciled after the last Ramadan celebration.

Adeyemi, who completed his National Youth Service in 2017, said he had no reason to kill her because he hoped to use her father’s connection to secure job.

He said that Oluboyo came to his house on Thursday because of her project which he was helping her to do.

According to him, they had finished chapter one and her supervisor had already approved it and she came for final correction so that she could move to chapter two.

He explained further that the girl later travelled to Lagos on Friday to buy some wrist watches but she forgot to drop her project with him and promised to return to school from Lagos.

“Meanwhile, on Saturday she snapped both the soft and hard copy of her project to me on my WhatsApp  for correction.

“So, I was surprised when I heard a knock on my door later in the day and she entered my room.

“She later told me that she wanted to receive some visitors in my place, and few minutes later she brought two boys in. I was not surprised because that was not her first time to bring someone to my house.

“Later when they came in, we exchanged  greetings and I left them in the room. But after 30 minutes, one of the boys called me in and I discovered he held a small gun in his hand while the other boy was on her, naked.

“And I heard Khadijat saying ‘I will not tell anybody.’  The boy strangled her to death and threatened me not to shout or else they would kill me.

“They are the ones that killed and buried her. I could not shout after they left because of the implication of what has happened, for I was sure nobody would believe me.

“On the fifth day, I was not comfortable anymore, so I exhumed her body and confided in my younger brother who advised that we should inform our father about the development.

“It was my father who informed the police before I was arrested,” Adeyemi said.

Mr. Femi Joseph, the Police Public Relations Officer (PPRO) of the command who paraded Adeyemi with other suspects, said he would soon be charged to court after completion of investigation.(NAN)