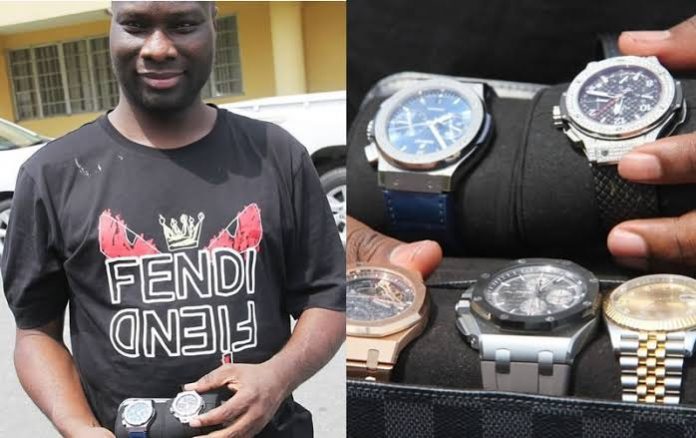 The Economic and Financial Crimes Commission said that it recovered wristwatches worth N20m from social media celebrity Ismaila Mustapha.

The suspect popularly known in social media circles as Mompha, according to a statement by the commission, was arrested on his way to Dubai last Friday.

He was alleged to have used his bureau de change to launder funds.

“The suspect was arrested on Friday 18 October, 2019 at the Nnamdi Azikiwe International Airport, Abuja on his way to Dubai, United Arab Emirates following series of actionable intelligence reports linking him to organised transnational cyber fraud and money laundering.

“Ismaila allegedly perpetrates his fraudulent activities under the cover of being a Bureau de Change operator, to launder his proceeds of crime. However, the suspect has volunteered useful information while investigation continues.

“At the point of arrest, five wristwatches with a total value of over N20m were recovered from him. The suspect will be charged to court as soon as investigation is concluded.”

Mompha is well known of fleet of exotic cars which includes Bentleys, Ferraris, Mercedes Benz and other fancy cars.