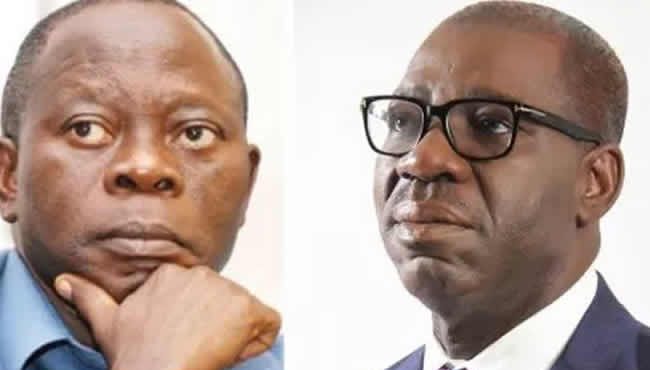 Governor, Godwin Obaseki of Edo State, has accused the National Chairman of the All Progressives Congress, APC, Mr. Adams Oshiomhole, of being biased in his opinion on the emergence of the state assembly Speaker.

Obaseki, in a statement by his Special Adviser on Media and Communication Strategy, Crusoe Osagie, on Saturday, said his predecessor should have waited to hear from all sides in the matter before taking sides.

He said Oshiomhole’s comments on the Edo House of Assembly crisis showed that he had vested interest in the matter.

Recall that the APC National Chairman at a recent press conference on the crises in Edo and Bauchi states Houses of Assembly, posited that both cases were similar.

“I am ashamed to talk about it, but there is nothing to hide. We have a similar situation in Edo, where in our case we have 24/24, all of them APC, but somebody wants a particular person as a Speaker, 19 out of 24 are opposed to this person,” he said.

However, in the statement by Obaseki’s media aide, he said: “We read with utter astonishment a statement credited to the National Chairman of the All Progressives Congress, Adams Oshiomhole, with respect to Governor Godwin Obaseki’s alleged role in the inauguration of the Edo State House of Assembly.

“Apart from the fact that he based his conclusion on a totally false and baseless premise, we believe that he could have shown that he didn’t have a vested interest by simply inquiring from his friend, the governor, directly, or any official of the State Working Committee of our party to what actually transpired.

“Oshiomhole’s failure to satisfy the basic tenets of natural justice which makes fair hearing from all sides of a matter mandatory, has clearly exposed his bias in this issue.”

Meanwhile, it was gathered that some of the aggrieved members of the Edo State House of Assembly, who have accused the governor of threatening their lives have reported him to the Department of State Services and Inspector-General of Police, Mohammed Adamu, respectively.

The lawmakers, who were allegedly barred from the inauguration of the 7th House of Assembly, alleged that Obaseki provided police cover to thugs who attacked them while they were meeting at a hotel in Benin.