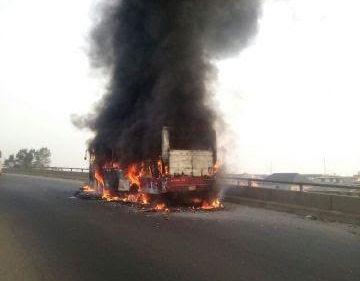 The bus was headed towards Iyana-Oworo when it caught fire just after Adeniji Adele axis of the bridge.

The cause of the fire was not known as at the time of filing this report.

However, by the time Next Edition got to the scene of the incident, which caused a traffic gridlock on the bridge, the Nigerian police, Fire Service, LASTMA, officials were at the scene to direct traffic.

According to eyewitnesses, there were no casualties from the incident.