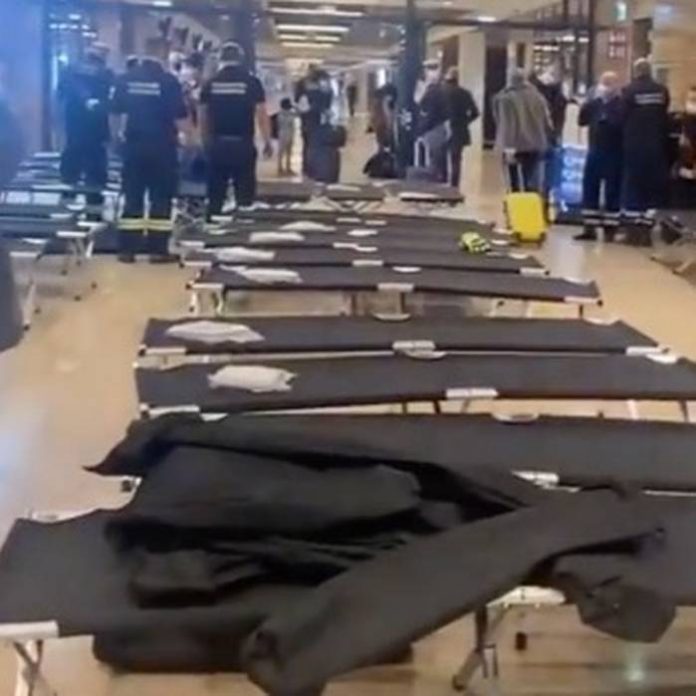 A video filmed at an airport in Germany shows a plane-load of British people being “trapped” behind a cordon manned by security guards – allegedly telling them they can’t leave until they test negative for Coronavirus.

In the clip, angry passengers are heard talking to the guards while dozens of folding beds are put down in the airport for the passengers to sleep on.

Julia Stankiewicz, who filmed the chaotic scene in Berlin, called the stringent move a “joke” in the on-screen caption.

With the angry emoji, she added: “Holding us for 10 hours with no explanation.”

The passengers, including children, had to hunker down for the night before being permitted to leave in the morning.

According to airport bosses, the sudden quarantine was imposed because of the new strain of Coronavirus running rampant in the UK said to be 70% more infectious than the original one.

The new strain is spreading in the south, where many areas have been hit with Tier 4 restrictions.

In another video, shared by German publication BILD, a woman at Hanover airport pleads: “We are being held against our will!

“We have been tested, but are not allowed to leave the airport.”

A spokesperson for Berlin Airport confirmed the emergency quarantine and told The Mirror: “Yes, more than 70 passengers from Great Britain had to spend the night at BER airport.

“Due to the new virus variant, the entry of air passengers from Great Britain had been stopped at several German airports.”

So far, five countries outside the UK have reported cases of the new coronavirus strain – Italy, Denmark, the Netherlands, Australia, and British Overseas Territory Gibraltar.

France has closed its borders to the UK with even lorries not being permitted to enter, sparking fears of food shortages because many products are imported.

The UK supplies just over half (55%) of the food it consumes, according to the government.