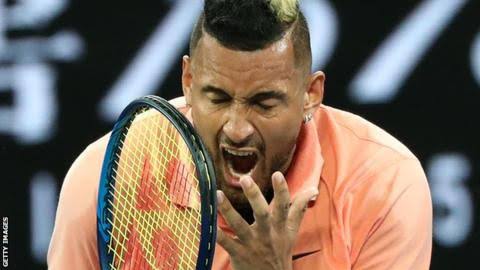 Nick Kyrgios beat Karen Khachanov in a five-set thriller at the Australian Open to set up a last-16 match against top seed Rafael Nadal.

The Australian, 24, needed nearly four-and-a-half hours to win a tense third-round match against the Russian – having led by two sets and a break.

But he came through in a final-set tie-break at a boisterous Melbourne Arena.

“That’s one of the best wins of my career. It was insane,” Kyrgios said.

Kyrgios leads 2-1 in his head-to-head record on hard courts against Nadal, with whom he has rarely seen eye-to-eye.

The pair, who will meet at Melbourne Park on Monday, last faced each other on grass at Wimbledon in July when 19-time Grand Slam champion Nadal won in four sets.

The world number one wrapped up a straightforward win about seven hours earlier than Kyrgios, whose brutal contest against Khachanov lasted for four hours and 26 minutes.

“I’m not thinking about that [playing Nadal] – I’m just thinking about my legs and getting them into an ice bath,” Kyrgios said on court, as he struggled to speak after his victory.

Kyrgios has previously described Nadal as “super salty”, while Nadal has been visibly irritated by the Australian’s erratic on-court behaviour in the past.

The BBC reports that the prospect of another meeting between Kyrgios and Nadal has been a tantalising one since the Australian Open draw was made nine days ago.

And, after Nadal thrashed Carreno Busta in his “best match of the tournament”, Kyrgios ensured it would happen by seeing off 16th seed Khachanov in an epic.

“Whatever happens between us, he [Nadal] is an amazing player. Arguably the greatest of all time,” Kyrgios said.

After clinching victory over Khachanov, Kyrgios fell to the court in celebration and laid out on the baseline before rising to wearily take the acclaim of the crowd.

Kyrgios led 3-0 in the deciding first-to-10 tie-break, used to settle matches that reach 6-6 in the fifth set at the Australian Open.

Roars greeted every winning point for the Australian number two, with anguished cries heard as Khachanov fought back in a gripping battle.

The pair were deadlocked at 6-6, then 7-7, before a Kyrgios forehand into the net post gave Khachanov an opportunity to serve out the match.

However, a pinpoint backhand down the line finished a tense rally, leaving Kyrgios grinning and the crowd on their feet as Khachanov missed his chance.

Khachanov then hit a backhand into the net for Kyrgios’ third match point – one hour and 54 minutes after his first – and pushed another wide to cause pandemonium in the Melbourne Arena.