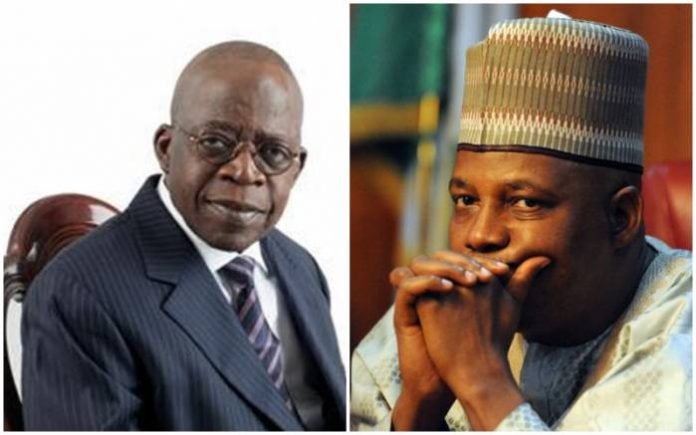 Asiwaju Bola Tinubu, Presidential Candidate of the ruling All Progressives Congress (APC), has defended his choice of Senator Kashim Shettima as his running mate, explaining that he could not choose a Christian and a Muslim at the same time.

Prior to the unveiling of Shettima, the polity was heated up over single-faith ticket.

While the Christian Association of Nigeria (CAN) rejected the idea and warned parties against it, some stakeholders asked Nigerians to focus more on competence than sentiment.

Speaking on settling for Shettima, Tinubu said all his life, decisions regarding the team around and supporting him had always been guided by the principles of competence, innovation, compassion, integrity, fairness, and adherence to excellence.

He said he consulted widely on the issue of running mate and he appreciated the perspectives of leading members of the party, political allies and key national figures “who see Nigeria’s future as I do”.

Tinubu specifically said the belief in prioritising leadership, competence, and the ability to work as a team over other considerations influenced his running mate choice.

“I am mindful of the energetic discourse concerning the possible religion of my running mate. Just and noble people have talked to me about this. Some have counselled that I should select a Christian to please the Christian community. Other have said I should pick a Muslim to appeal to the Muslim community. Clearly, I cannot do both.”

“Both sides of the debate have impressive reason and passionate arguments supporting their position. Both arguments are right in their own way. But neither is right in the way that Nigeria needs at the moment. As president, I hope to govern this nation toward uncommon progress. This will require innovation. It will require steps never before taken. It will also require decisions that are politically difficult and rare.

“If I am to be that type of President, I must begin by being that type of candidate. Let me make the bold and innovative decision not to win political points but to move the nation and our party’s campaign closer to the greatness that we were meant to achieve.

“Here is where politics ends, and true leadership must begin. Today, I announce my selection with pride because I have made it not based on religion or to please one community or the other. I made this choice because I believe this is the man who can help me bring the best governance to all Nigerians, period, regardless of their religious affiliation or considerations of ethnicity or region.”

To those who might feel displeased by his action, Tinubu said, “May I say this to all of you, especially to those who will be disappointed in my selection based on religious considerations. I will not and cannot ignore the religious concerns and ethnic sensitivities of our people. Taking them into due consideration is an important part of good and able governance. But religion, ethnicity and region cannot always and fully determine our path. To forge ahead as a nation toward development and prosperity, we must break free of old binds. We must recalibrate our political calculations to where competence and fairness matter more than reductive demographics.” (Daily Trust)