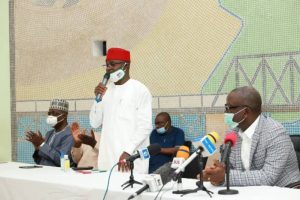 The Governor gave the charge on Tuesday at the Benue Peoples House Makurdi, when the new PDP EXCO paid him a visit shortly after their inauguration.

He urged the party officials not to take sides but provide a level playing ground for all those seeking elective positions on its platform, stressing that dialogue and the interest of PDP should be allowed to prevail at all times.

He pledged continued support, fairness, justice and equity in the conduct of party affairs, stressing that the actions of PDP faithful should be geared towards uniting the party to make it stronger.

Governor Ortom congratulated the new PDP executive members on their inauguration and charged them to be diligent and hardworking as they work to deliver the PDP again in 2023.

State Chairman of the PDP, Mr John Ngbede stated that the visit was to appreciate the Governor for his support which led to their reelection.

He said they felt honoured by the support and pledged unflinching loyalty to the Governor’s administration, adding that they will justify the confidence reposed in them.